Hot Off the Press — it’s ISRA Courtside with a record of 36 pages — let’s call it an eMagazine! Enjoy…just click on the thumbnail of the issue to the right, here on the home page.

Ben Croft Clinic
3x US Open Doubles Champion Ben Croft will be holding a clinic at Glass Court Swim & Fitness in Lombard Ill. The clinic will be held December 15, 2018 from 9am to Noon. The cost is $70. The clinic will include shot selection, court position, serve strategy, doubles strategy, anticipation, and play the pro. Contact Dan Jaskier at Glass Court Swim & Fitness 630-629-3390 to sign up.

The 2018 – 2019 Season officially kicked off with the 25th Annual Summerfest at Glass Court the last weekend of July and the 3Wall Brawl at the Rainbow Beach Courts the following weekend. Full results are available on R2 Sports.

2018 ISRA Board Election
The ISRA Board held its Annual Meeting on June 12, 2018. As with all ISRA Board meetings, this meeting was open to the membership. The Annual Meeting is particularly important since all members attending have a vote in the election of the ISRA Board of Directors. Board positions are staggered two-year terms. There were a number of open seats on the Board for this year’s election.

The Board slate consisted of the following individuals:

There were no additional director nominations received from the membership, and the Board slate was accepted automatically. All terms commenced on 7/1/18. Adjustments were made in the terms of some Board members to ensure balanced election slates in future years.

In a closed session of the Board, Geoff Peters was reappointed to the office of ISRA Vice President, Barbara Vagedes was elected as Secretary, and Dolores Lamberson was elected Treasurer.

New members of the Auxiliary Board this year are Dan Jaskier and Eric Jensen.

Any ISRA member who wishes to help improve the quality of racquetball in Illinois and familiarize themselves with Board processes is welcome to join the Auxiliary Board. Contact Laurel Davis (laurelmdavis1@gmail.com) or any ISRA Board member. Come out and support Illinois Racquetball!

Men’s Travel League Format Update
Starting in October, the ISRA Men’s Travel Team will be undergoing format changes. Both of the current leagues are going to be modified from A and B/C leagues to Open/A and A/B leagues. Rosters will be able to hold a maximum of 15 players. The Wednesday night Men’s Open/A will have a maximum of three Open level players on their roster, and the Thursday night Men’s A/B league will have a maximum three A level players on their roster. There will also be a cap on the amount of Open and A players who can play each week. On Wednesday evenings, only two Open level players on your team are eligible to play each week and on Thursday evenings only two A level players are eligible. This will open up the possibility of more players in the league and keep the league on an even playing field. Leagues will still have three singles matches and one doubles match. Scoring will remain the same. In order for players to be eligible for playoffs, they must play three times in the league (same as last year). Each team will receive an ISRA player eligibility list. This will keep all teams fair and eliminate any sandbagging. We are trying to get other clubs to participate. Hopefully these changes will help the ISRA Men’s Travel Team survive and thrive! It should be a fun season. 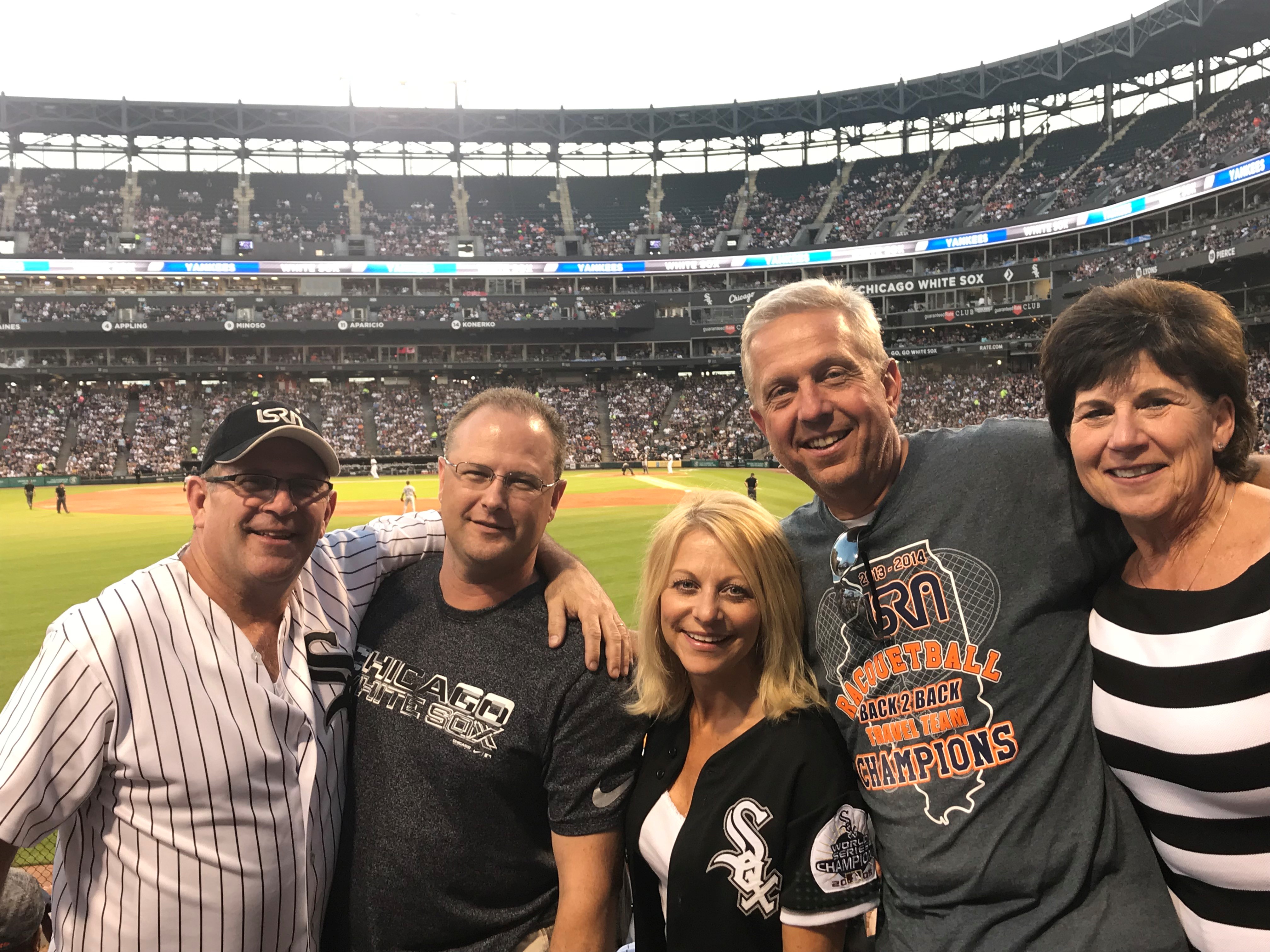 Thank you to Trevor Snyders for arranging our visit to Guaranteed Rate Field to see the White Sox. Not only was a good time had by all, but we were featured on the scoreboard as well!

More info coming on the 2018-19 season schedule (the preliminary schedule is already to the right) after Labor Day!

— Your ISRA Board of Directors