Summer has finally arrived in Illinois, and surprisingly the courts seem to be busier at some clubs than they were during the winter!  Now that it is hot outside, the opportunity to sweat in an air-conditioned facility while getting a great workout with friends seems to be very appealing to a lot of players.  That doesn’t count the regular outdoor players who seem to congregate in La Grange during the early part of the week and at Rainbow Beach in Chicago later and on the weekends.  They have discovered that the indoor and outdoor versions of the game are very similar.

We just completed the NMRA International Championships at The Glass Court (with the Westmont Park District Fitness Club as a second site).  This event brought together 132 competitors, age 40 and older, from around the country and Guatemala to compete over four days of round robin and pool play.  Each player had MANY matches – generally two games to 15 with bonus points for winning games and matches.  Think about it – 16 players in the 65+ division and 9 players in the 75+ bracket!  We had 42 players from Illinois compete – a great turnout and a chance for many of our players to match up against some of the best seasoned and mature players from around the country.  Highlights include no referees, almost no arguments, and a banquet at the Embassy Suites on Saturday night. The event helped raise over $1,500 for junior racquetball in Illinois in its spare time.  Talk about having a good time AND giving back – the NMRA rocks!!

Speaking of great events, we have committed to having the Ladies Professional Tour back for the 28th Annual Turkey Shoot featuring the LPRT and presented by Platt Hill Nurseries the week before Thanksgiving!  I dug out this draw sheet from last year’s event, and you haven’t seen racquetball until you have seen Rick Seaberg and Platt Hill on the Glass Court with two of the best to ever play the game! 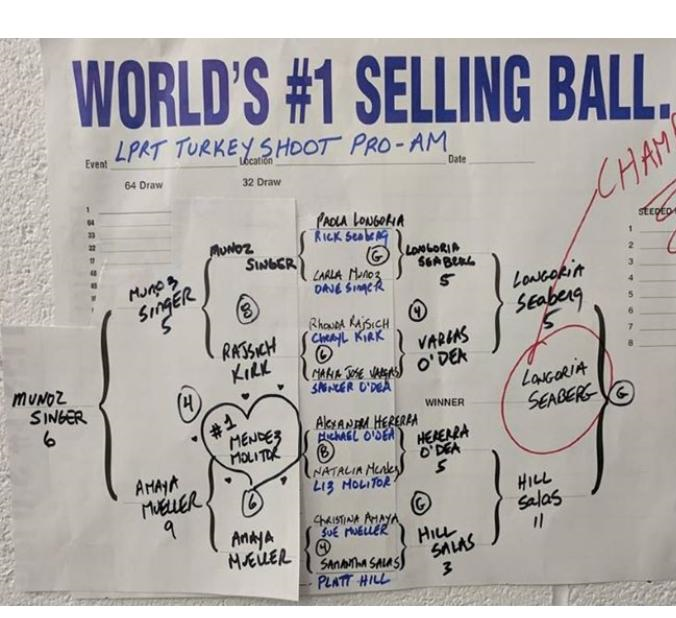 Look at that Pro-Am lineup – never mind the fantastic ladies of the LPRT.  We’re talking Dave Singer, Sue Mueller, Spencer O’Dea, Liz Molitor, Cheryl Kirk, and Michael O’Dea on the court, along with Platt and Rick, to do battle with their partners!  This is one of the great benefits of being one of our top sponsors – the ability to compete on the court with the Pros on Thursday night!  Please let Dan Jaskier or Geoff Peters know immediately if you are interested in throwing your hat into the ring for this very special event!!

Continue to enjoy this hot summer on the cool courts!  And, as always – let us know how you can help the ISRA promote racquetball and grow our sport!